What is climacturia? How can it be managed? 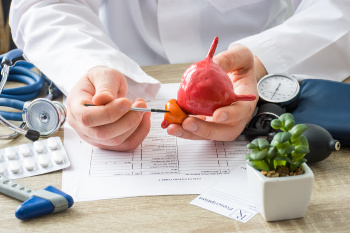 Climacturia, also called orgasm-associated incontinence, occurs when a man leaks urine as he ejaculates. It is a common side effect of radical prostatectomy (surgical removal of the prostate gland).

The prostate is surrounded by nerves and tissue needed for proper urinary and sexual function. But sometimes, these nerves and tissues are damaged during surgery, which can lead to incontinence and erectile dysfunction.

The percentage of men who experience climacturia after prostatectomy varies across studies. It can be a distressing situation for both men and their partners. Some men start to avoid sex because of it, leaving partners to wonder what is wrong. Others feel too embarrassed to talk about it, with their partners or with a healthcare provider.

In a January 2020 Journal of Sexual Medicine study, researchers surveyed 3,207 men to learn more about their experiences with climacturia. The men’s average age was 61 and they were all having sexual problems after prostatectomy. Almost a quarter of them had climacturia.

For about 70% of the men, urine leaked in drops. The rest leaked 30 mL (about an ounce) or more. About half said climacturia occurred during 25% to 50% of their orgasms.

About 45% of the men with climacturia said their situation bothered them. And 15% thought their partners were bothered by climacturia.

Climacturia may be managed in several ways. Some men find it helpful to empty their bladder before sex. Other options include:

Men with climacturia are also encouraged to communicate with their partners and share their feelings of frustration or anxiety. Without communication, partners may feel distanced, especially if the man is avoiding sex. Couples may find that seeing a therapist can help them learn to talk about sexual and relationship issues.