Can a vasectomy cause erectile dysfunction (ED)? 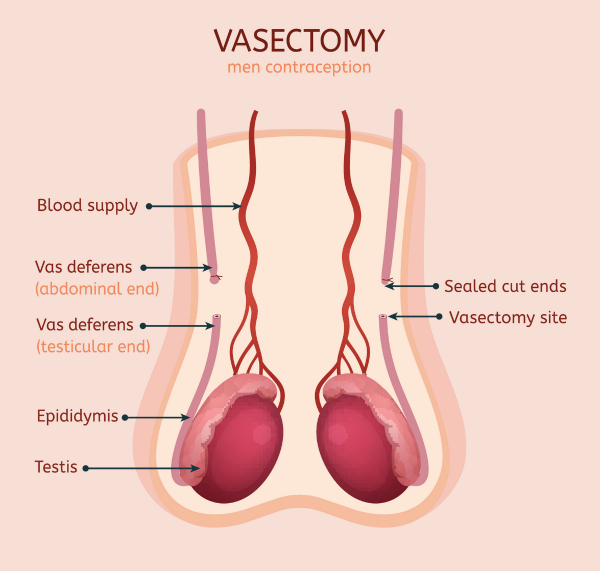 It’s very unlikely. For most men, erectile dysfunction (ED) after a vasectomy is not caused by the procedure itself.

Vasectomy is one of the most reliable forms of birth control. It involves cutting, tying, or searing the vasa deferentia – the tubes that carry sperm from the testes (where the sperm cells are produced) to the urethra (where they are expelled from the penis during ejaculation).

In this way, the sperm cells’ path is blocked, greatly lowering their odds of fertilizing an egg cell and creating a pregnancy. (The sperm cells are absorbed into the body.)

Note: Men should know that the birth control effects of vasectomy are not immediate. Sperm can still be present in the vasa deferentia for several months, and couples should still use another birth control method until a doctor advises otherwise.

Some men worry that they will have problems with erections after vasectomy. However, the procedure does not alter any of the organs or processes needed for erections. Men will still have erections the same way:

In a vasectomy, the sperm’s path is altered. The man’s body still produces semen, and he ejaculates just as before. But the semen should not contain any sperm.

In 2014, the Journal of Sexual Medicine published a study on the sexuality of 76 couples following vasectomy. Using an assessment tool called the International Index of Erectile Function (IIEF), researchers compared the men’s ability to have erections before and after surgery. They found that overall, the men’s average IIEF scores increased a little bit, with improvements in the erectile function, orgasmic function, and general sexual satisfaction domains. In general, ED was not a problem for men after vasectomy. Their female partners reported better sexual function, too.

Some degree of depression or anxiety might occur after vasectomy. Men may feel that they have lost some degree of their manhood, even though their sexual function remains, for the most part, unchanged. They may feel regret or depressed that they will no longer be able to father a child (unless the vasectomy is reversed). These emotions might affect erections.

Men who have questions about the mechanics of vasectomy or the potential emotions that might accompany it, should feel free to discuss their concerns with their urologist.

Men should also know that vasectomies can have other complications like bleeding, pain, and infection. While not typical, some patients experience long-term pain. Patients should consider their options carefully and talk openly and thoroughly with their partner and their doctor before having surgery.